Suicide Prevention in the Autism Community 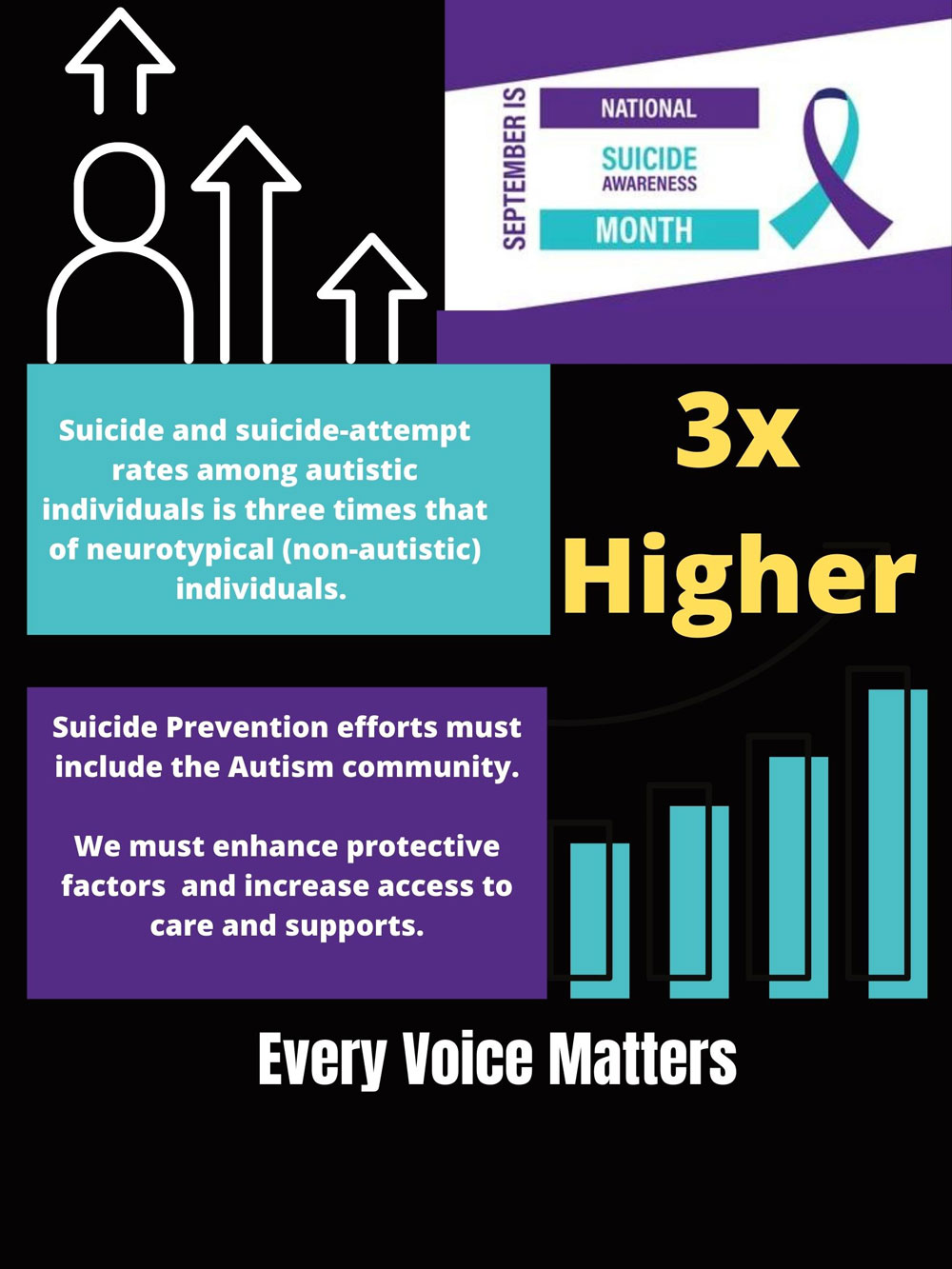 September is National Suicide Prevention Awareness Month, and the urgency for autism inclusion is needed when discussing suicide prevention. Several studies have highlighted the disproportionate rates of suicide attempts and death by suicide in autistic adults and youth worldwide. Autism occurs in 1 in 54 children and 1 in 45 adults in America. This complex disorder is often coupled with various co-morbid medical and psychological conditions. Risk factors outlined in many studies include: camouflaging/masking Autistic traits in an attempt to be accepted and adhere to societal norms; co-morbid diagnoses (depression, anxiety, psychosis); barriers for accessing traditional mental health services, and lack of social support systems.

In honor of National Suicide Prevention Month, and it seems appropriate to take this time to share how suicide impacts the autistic community.

Tom Taylor, an Autistic Self-Advocate and AFO Board member from Norman, Oklahoma, shared some personal insights to help shine a light on the need for inclusion in general suicide prevention efforts.

“As the autistic father of an autistic daughter, I look at my child, and I think about suicide attempts and deaths of Autistics. I also look at the differences between the autistic traits of my daughter and my own. It has been my experience that autistic people without intellectual disabilities tend to come in three primary categories. The first are those autistic people who do quite well in social situations and enjoy the company of others – these are autistic people who have cobbled together enough social skills to fake it in a neurotypical world. The second are those who don’t fit in with society and are either oblivious to this fact or simply don’t care to interact with others; this is the type my daughter is. I worry that she’ll someday care, but at this point, humans don’t interest her. The third type is those who want to interact with others and tend to do so poorly; this is me. I can fake social skills temporarily, but I spend a lot of mental energy worrying that I have inadvertently offended someone.

I have been in social situations with other autistic people where the conversation moved to talk about suicide, and the stories told were beyond troublesome. They spoke of their suicide attempts or their suicidal thoughts – and every one of us had a harrowing tale to tell about it.

The segment of society that encompasses socially inept people wanting to socialize is a group of people that also tend to have diagnoses dealing with depression. Going through life hoping to connect with people, find everlasting love, have children, and land a meaningful job are too often unfulfilled desires; our population often lacks the skills needed to obtain or keep these things in life others take for granted. Unfulfilled desires cause suffering, and suffering leads to suicidal thoughts or attempts.

To combat suicide in the autistic community, two initial steps are needed. The first is a conscious effort to include autistic people in our society. The second is autistic people need to monitor their feelings and reach out for help before their loneliness and depression consume them.”

We must continue to do better in building systems that are inclusive of diversity to reach all individuals needing support. Research continues to demonstrate a substantial need to engage autistic individuals in traditional and nontraditional mental health and social supports to enhance their quality of life and truly meet them where they are. There must be a continued effort beyond Suicide Prevention Awareness Month to address the preventative measures, policies, resources, and treatment in an inclusive way. There is a need to build additional protective factors for Autistics in all suicide prevention efforts.

This is the start of a much-needed conversation, and it is the hope that the Autism community continues to be included in all suicide prevention conversations moving forward. Every life is precious and worthy of love, health, compassion, and longevity.

Written by Dr. Crystal Hernandez, Board member and DEI Officer for AFO and Executive Director of the Oklahoma Forensic Center